One of Rock n Rolls legendary groups has made it to the big slot screen. Guns N Roses are now immortalised in an online video slot thanks to Netent. The new Guns N Roses slot will take you back to a few decades ago, where music was good and the hairstyles were outrageous!

Guns N’ Roses was first founded in 1985 in LA with an original line up of band members: Vocalist Axl Rose, Lead guitarist Slash, Rhythm guitarist Izzy Stradlin, Bassist Duff McKagan and Drummer Steven Adler. Guns N Roses' debut album was called ‘Appetite for Destruction’ which was released in 1987, and Guns N Roses continued to smash hits with another 6 number one albums, 16 top 10 singles and eventually selling over 100 Million Albums worldwide to become one of rocks most revered bands of all time!

It’s been roughly 30 years since Guns n Roses first formed and now they’ve put their name to an epic Netent video slot too! We don't doubt that everybody will absolutely love this slot.

To us, it doesn’t matter whether you’re a Guns N Roses music fan or not; there’s nothing to not like about it. It’s been designed extremely well by Netent, it’s different, it’s wild - just like the band, and above all it has what you want. Which is lots of entertaining in game features to keep you enthralled and in the wins!

Most of us reading, who were GNR fans back in the day, still are to this day. Guns N Roses music is pure classic rock. So, it’s really great to see an online slot which has the legendary GNR Logo and soundtrack to play.

It’s really something fun, nostalgic and different from what Netent have released before. When Netent first told the iGaming community that there would be a Guns N Roses slot launched in 2016, we were a little bit surprised, but excited all the same.

Netent has designed the Guns N Roses Slot with 5 Reels, 3 rows and 20 pay lines. We don’t have to tell you that the slot is designed in total iconic GNR fashion, album covers, plectrums and music vdeoes on the reels, as well as the bank members.

To get started, choose a recommended Netent Casino below, and start by loading the slot and setting up to be played withing your preferred betting limits and levels. Guns N Roses Slot has 10 different levels, and coin values which go up to £1. The minimum bet you can make per spin on Guns N Roses slot is £0.20 with the maximum bet being as much as £200 per spin.

Guns N Roses Slot has everything you’d expect from a rock themed video slot. What’s really cool is that you can choose a Guns N Roses song track of your choosing to play in the background, whilst you're spinning the reels!

This is a completely novel idea and one which is always welcome as we haven't actually had the choice to play what we want before from any slot. You can choose from smash hits: Welcome to the Jungle, November Rain, Paradise City, Sweet Child of Mine, and Chinese Democracy

In case you wondered what this slot can offer you when you get down to the nitty gritty, then aside from a trip down nostalgia lane and an awesome soundtrack, then we’ve got some good news for you! Not ones to let their fans down, Netent have made the Guns N Roses Slot packed full of extra features, including Wilds, Multipliers and a wicked free spins game as well as a multi awarding bonus wheel, which can give off instant cash prizes or more features to help you win even more coins! 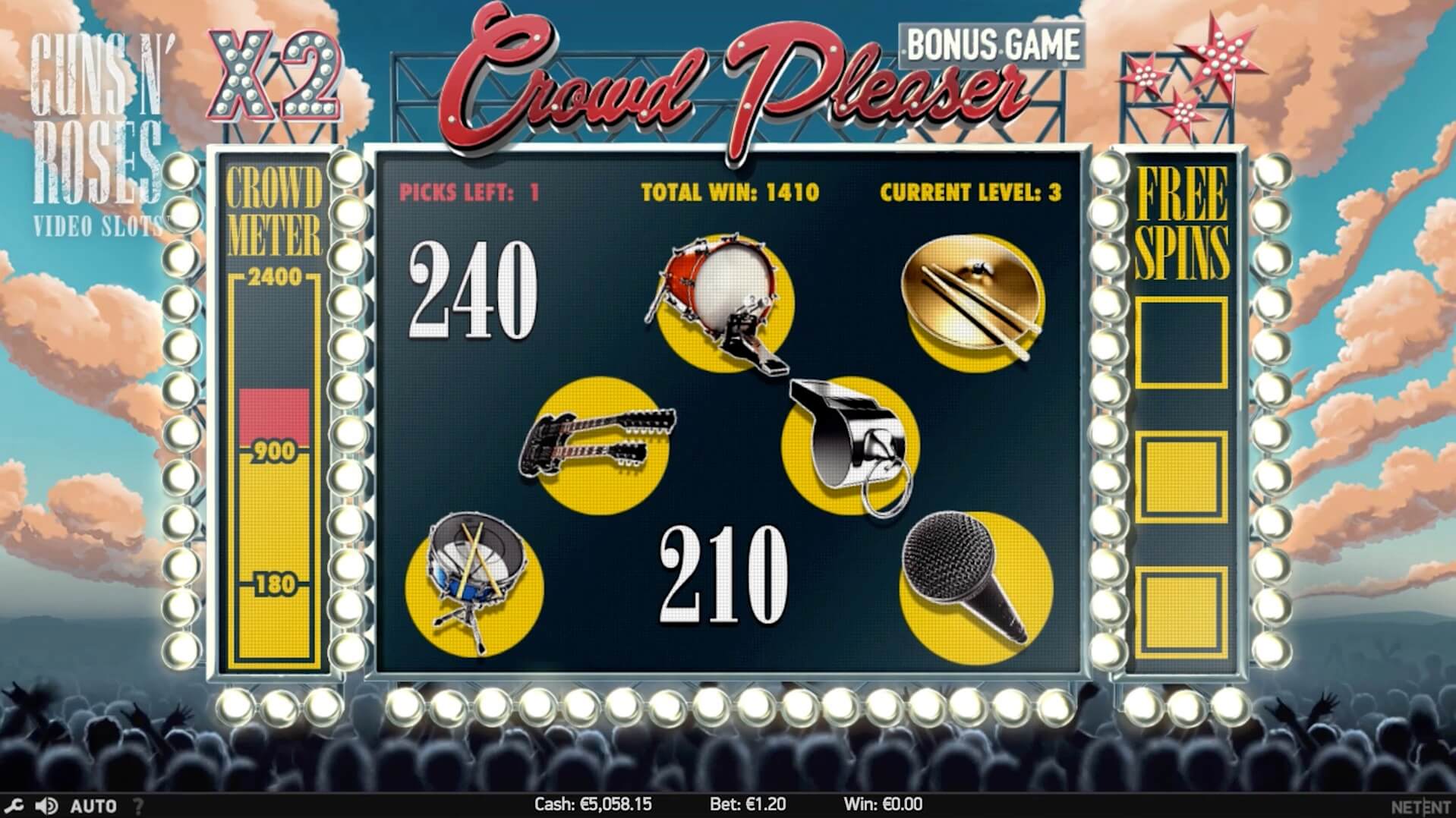 The Wild Symbols are quite random and can appear anywhere on the reels and at any time, apart from reel 3 during the ‘Appetite for Destruction’ Wild feature. Wild symbols substitute all other symbols, except the bonus symbols to help create some winning pay lines. What’s more is a Wild Symbol can also turn into an Expanding Wild, and can spread across the reels (vertically) to maximise wins. The Expanding Wild symbols can substitute all other symbols, except for the Appetite for Destruction Wild, the overlay Wild in Legend Spins and the Stacked Wild in Encore Spins.

Random Feature The Legend Spins are quite a cool random feature, so they can pop up at any time. When they do, they 3 free re-spins will be activated, with 1-2 Stacked Wild reels:

When you get 3 of the Bonus symbols appearing on reels 1, 3 and 5 during the main Guns N' Roses base main) game, it’ll award one of 3 bonus games, randomly which are as follows: Encore Free Spins, Crowd-Pleaser Bonus Game or the Coin Win. When you trigger it, a bonus wheel will appear and will start to spin. Here, you must click the STOP button to stop the wheel from spinning and to see which feature you’ll be rewarded with. It’s worth noting that the minimum coin win at this stage is 200 where as the maximum is 600.

This is a really fun feature and is made up of an exciting 'Pick & Click' game of 3 different levels. You’ll have a total of 8 picks during the game, which are split across levels that you must progress in so that you will be able to continue. As well as coin wins, the Crowd-Pleaser Bonus Game also has Free Spin symbols and a +1 pick symbol. If you get 3 free spin symbols during the feature, you will be rewarded with 10 extra free spins! In Level 1, you’ll be presented with 3 picks to accumulate some coin wins, where the minimum is 60.

It goes without saying that Gun N Roses Slot is available to play both on desktop and mobile casino. Guns N Roses Touch™ Mobile slot is available to play on all mobile devices, both mobile phones and tablets with touch screens and it looks great! The quality is still the same and the mobile edition doesnt lose any features that the main desktop version offers.

Guns n Roses Touch™ Slot is therefore available to play anywhere you want to play, on any mobile device you choose. What’s neat is that Netent's Touch™ Slots are known to be easy to play on smaller touch screen devices as they’re adapted and configured extremely well, so Guns N roses slot is well worth checking out if you’re looking to play mobile slots, with the freedom of being 'on the go'.

It’s fair to say that Netent has done one of the most iconic rocks bands of the century suitable justice with this online slot machine! After some hype surrounding it's official launch, the Guns N Roses Slot lives up to expectations and has now been branded the most successful slot launch of all time (at the time of writing).

We're huge Guns N Roses fans but that aside, the slot is well designed, offers many fun and thrilling in game features and a cherry on the top - the ability to play your own Guns N Roses soundtrack at your leisure! Try Guns N Roses Slot out for yourself, and take a look below, at some of the best casino sites that offer the game, for free pr real money.

Where You Can Play Guns N Roses Slot