The spine chilling old tale has now found its way to the big screen. But we mean another big screen, your computer or mobile screen! Dracula Slot is a modern branded Video slot, released by Netent and in association with Hollywood heavyweights Universal.

Dracula Slot is supposed to be creepy, but there is a hidden love interest in there too, in the form of Mina. You may remember from before that Netent’s cooperation with Universal has also brought us branded slots such as South Park, The Invisible Man Slot, Creature from the Black Lagoon Slot and Scarface Slot. 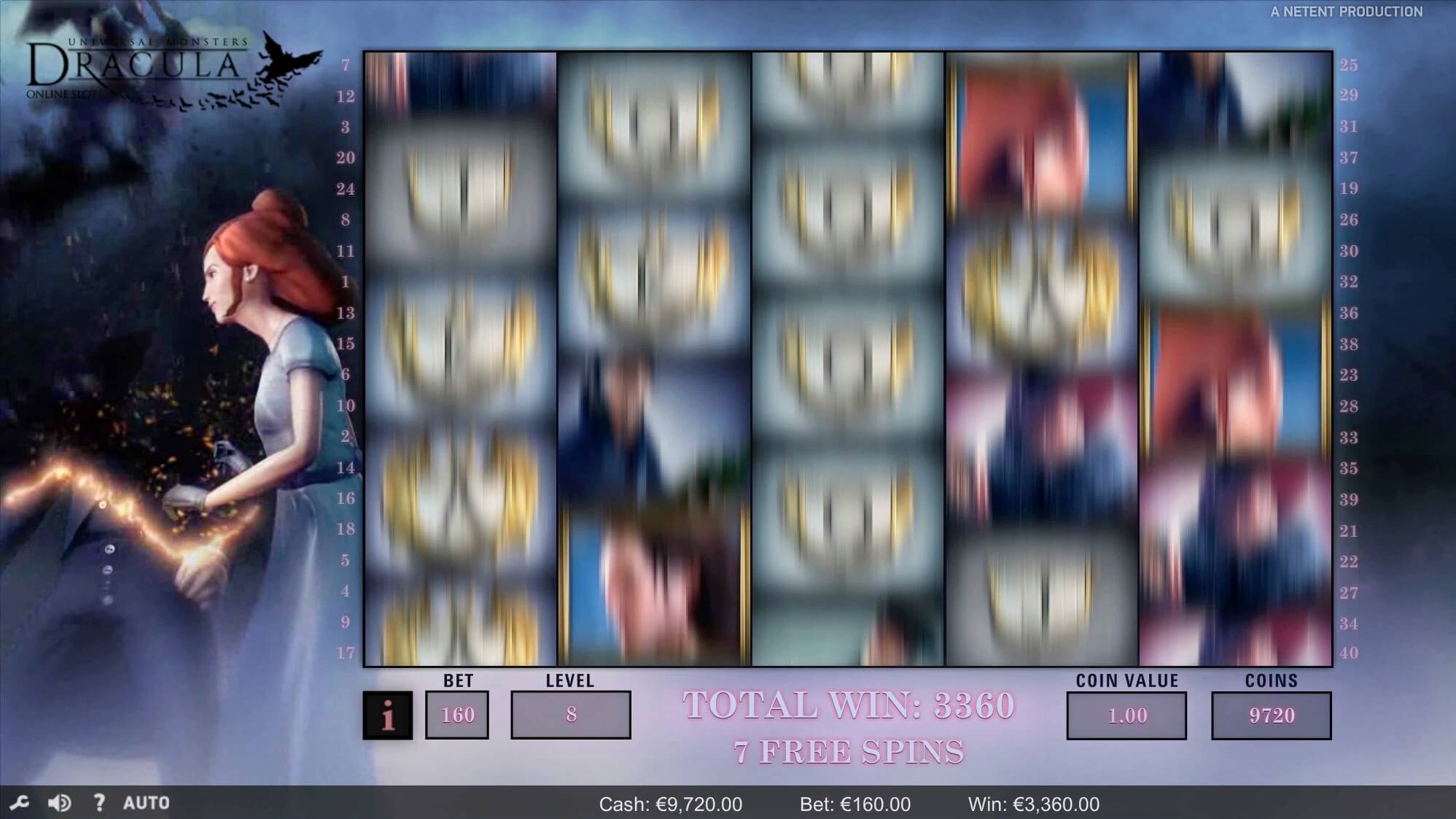 How to Play Dracula Slot

If you’re thinking that Netent already had a vampire ‘Dracula’ themed slot then you are correct. Although, strictly speaking it was never branded as Dracula, it just had an (old school) Vampire Theme and is called: Bloodsuckers (2009). Bloodsuckers slot is a popular, yet much older slot that what Netent’s Dracula Slot serves up today.

Let’s not forget that the film was based on a novel which is known as Bram Stokers Dracula. The original film was made in 1931 but you don’t actually get see much of the film as Netent has re-mastered a completely real looking, yet blood sucking Vampire, which is more suited to newer movies such as Dracula Untold (2014) than on a movie created nearly a century ago.

It just goes to show how a character can be portrayed, as NetEnt’s Dracula is modern, brooding but definitely menacing as he sits intimidatingly beside the edge of the reels. Aside from the great graphics, the soundtrack really complements the slot as well.

Netent’s Dracula Slot is designed with 5 reels, 4 rows and a total of 40 pay lines. To get started, set the slot up so you’re within your playing levels that you're most comfortable with.

It’s possible to bet on Dracula slot from as little a £0.20 a spin to as much as £400 a spin. You can choose betting levels between 1 and 10, whereas the coin values you can choose to bet with in Dracula range between: £0.01 to £1. As a guide, the minimum can be worked out as follows:

Get prepared for Dracula Slot; it’s eerie, spine chilling and it may have you on the edge of your seat (not as much as Alien’s Slot though), which is all part of the fun!

There are quite a few extra features which make Dracula really interesting to play, including the all-new Bat Feature and a Freespins game as well.

The Bat feature can be triggered at totally random intervals when playing. You'll see Dracula himself, sitting on the side of the reels throughout when you're playing, until the Bat Feature is hit, that is. When you get The Bat Feature, Dracula himself will transform into a flock of bats that will then fly over and land on the reels.

Wherever they land (as a flock all clustered together) they’ll turn a random amount of symbols into the same identical adjacent symbols (randomly chosen and including the Wild symbol) to activate extra winning pay lines. Also, a helpful hint, is that it’s possible for all 20 symbols on the reels to be changed into identical symbols by the Bat feature - if you’re lucky which will result in a massive maximum win!

When playing the main game, Stacked symbols can appear on reels 2 (portrayed as Dracula) and on reel 4 (depicted as Mina, his love interest). Get this to happen and you will get 10 free spins for extra win chances.

Dracula Slot has an Rtp % of 96.6% and is considered to be a medium variance slot.

Dracula Slot can be enjoyed on mobile devices and tablets as part of NetEnt's Touch™ series. Netent Touch™ Mobile Slots are specially adapted Netent slots to be played on smaller, touch screen devices such as Tablets and Mobile Phones. Not every slot has been adapted, yet, but you are able to play Dracula Touch on your mobile or tablet.

Of course, being a Netent Touch™ slot means that is has amazing graphics and all of the same features and soundtrack are available in the Touch version as it does on the main web version. Dracula Touch Slot is definitely worth checking out.

Dracula Slot by Netent is a great branded video slot machine for slot players who enjoy dark, edgy and thrilling themed video slots. But don’t let that put you off as you’ll grow to like Dracula, and hope for his sake that his love interest in Mina works out, as you grow to be kind fond of him.

Dracula Slot keeps game play interesting with in game features such as the Bat Feature (brilliant graphics; where Dracula changes into a mass of Bats and lands on the reels to form extra winning pay lines) and of course the in game free spins feature. Dracula slot is considered a medium variance slot so there are frequent and small wins that will help you play for longer periods of times, but hit it right and you can land huge wins! Perfect for the all-round online casino player.

We recommnend to play Dracula Slot at the best netent casinos below.

Where You Can Play Dracula Slot