Netent are the ones responsible for bringing the Brothers Grimm tale of 'Hansel and Gretel' into an online slot format. Fairy-tale Legends: Hansel & Gretel Slot is the 2nd well known fairy tale theme game to be released and is packed full of interesting in-game features.

Fairy Tale Legends: Hansel & Gretel Fairy slot is the second “Fairy-tale legends” themed slot and comes after the first which was based on the tale of Red Riding Hood. Fairy-tale Legends Hansel & Gretel slot manages to capture all of the details of this well-known fable into a fantastic looking slot adventure

Fairy-tale Legends: Hansel & Gretel Slot is from by Netent and is designed with 5 reels and a total of 10 pay lines. Hansel & Gretel Slot is designed very much like the first in the series. It offers a nostalgic, ‘fairy-tale’ feeling, top level 3d graphics and is set within a moonlit forest with lots on intricate features and details. The sound track for this game is also perfect.

You’ll notice that on the reels, there are some beautiful looking icons which include birds, candy, Hansel and Gretel themselves, scatters and also treasure chests.

Fairy-tale Legends: Hansel & Gretel Slot can be enjoyed from as little as 10p per spin, to a larger £100 per spin, depending on which bet size takes your fancy, and we’d say is a slot machine that’s suitable for every one!

The return to player percentage of Fairy-tale legends: Hansel & Gretel Slot machine is set to a higher than average 96.71%. What’s more, the highest win you’ll be able to achieve in this game is a astounding £80,000 in the main ‘base’ game, but let it be known that there’s a possibility to get a higher win if the game features are triggered which brings us onto the next point…

This interesting feature occurs at random when you land a non-winning spin in the base game. A symbol is chosen at random from the symbols on the reels to match up until you get a winning combination. If you’re lucky, you can get up to 31 times your stake here.

This feature is where a cluster of game logos (between 5 and 9) appear as overlay symbols on the reels for 1 spin. Hit this feature and you can land some epic wins of up to 400 times your stake.

During this feature, a total of 2 full stacks of wilds will appear on reels 1, 2, 4 and 5 during the main game. It will trigger the Stacked Wild Re-Spin feature as mentioned above and can land you up to 400 times your stake here as well.

What’s more, there are some treasure chest bonus symbols which will appear simultaneously on reels 1, 3 and 5 which can trigger the main bonus features of the game. There are 3 in total which are as follow:

Pick from the candies which are stuck to the cottage. Each represents a multiplier, and you’ll have the chance to pick three, of which the average multiplier of those 3 is awarded.

This awesome feature awards instant cash wins which can go up to 15 times your stake. Nice!

Fairy tale Legends: Hansel & Gretel Slot has an Rtp % of 96.33% and is considered to be a medium variance online slot. 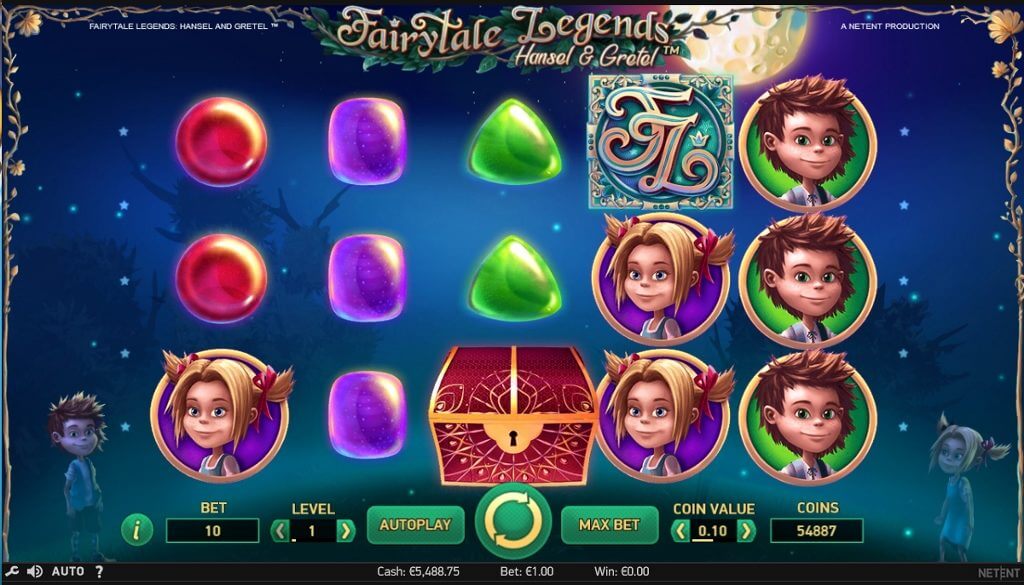 As with all Netent mobile slots, Fairy tale Legends Hansel and Gretel mobile slot not only looks amazing, it’s also packed full with the same features you’d see on the main desktop version, and is really easy to play on the go, on smaller devices including all mobile phones and tablets!

Fairy tale legends Hansel and Gretel slot machine offers so many in game features making this game a lot of fun to play. What’s more, not only does Hansel and Gretel Slot look amazing, it's perfect for all types of players too, allowing you to bet smaller amounts to higher amounts at £100 per spin.

Fairy tale Legends: Hansel & Gretel Slot is a perfect game for casino players who love a good looking classically themed slot. Check out our top Netent casinos below, which offer this slot and also the best Netent free spins and casino bonuses online!

Where You Can Play Hansel & Gretel Slot