Netent’s self-titled “Netent Rocks” Tour comes to a close with the legendary Motorhead Slot, which follows in the footsteps of the Jimi Hendrix Slot and Guns N Roses Slot. Play this thrilling and exciting online slot at our recommended Netent Casinos, and make sure you turn it up LOUD!

How to Play Motorhead Slot

It’s fair to say that Motorhead Slot is one of the best looking and exciting slots out there. Motorgead Slot is the third and final instalment of the 3 part “Netent Rocks” Tour which saw the launch of 2 other rock themed slots: Guns N Roses Slot and Jimi Hendrix Slot.

Motorhead Slot is certainly a fitting tribute to a band who lost their lead front man, Lemmy Kilmister last December,, but it’s safe to say that Netent have come up with the goods that’s worthy of such a band and a memory for a rock legend. Motorhead is, after all, a band that has sold over 30 million albums and played many a sold out stadiums and world tours

Motorhead Slot is designed by Netent with 5 reels and 76 pay lines. When you load the slot, you’ll notice instantly that it has an unconventional ‘grid’ reel layout compared to most other NetEnt Slots (apart from Dazzle Me Slot which also has the same) however, it’s this type of layout that actually help you win more, which we’ll get to explaining below.

Motorhead slot can be enjoyed on smartphones, tablets and also on desktop format. Motorhead Slot is a perfect game for all types of casino players as it can be played from as little as 20p to a whopping £200 per spin!
Motorhead Slot from a design perspective is probably as you’d expect it; its dark, its rock themed and set against a back drop of a stage with some obligatory rock amplifiers. It is similar Guns N Roses Slot, only darker and more edgy to fit with the bands image.

So now all that’s left to do is to get started playing Motorhead slot at our recommended Netent Casinos! Load the game and to increase some excitement levels from the get-go, you’ll be met with a warning. Yep, you read that right: It’s not every day that you play a slot and it starts off with a warning! Don’t forget, this is the Motörhead slot so expect some things to be a bit more on the extreme side, from the flashing lights to the rocking soundtrack that’s blaring out some legendary Motorhead songs!

Motorhead Slot is jam packed full of in game features which you’ll soon encounter when playing the slot. We’ve high-lighted the main ones below:

Every spin in the main game and in the Free Spins game (unless the Bomber Feature is active) 1 or more reels will be ‘Mystery Reels’. What happens with these is simple: after the reels have stopped spinning, if there are mystery symbols landing on the reels, the mystery symbols transfer into 1 random symbol except for a Scatter symbol to help you win more.

This is a cool feature. You can activate the Bomber Featured randomly before a spin in the main game only. Each ‘bomb’ consists of a cluster of mystery symbols and a certain amount of bombs will occur on the reels and will create at least 10 overlay mystery symbols. When each bomb has generated the mystery overlay symbols, you’ll see the reels will spin with a symbol being chosen in the same way as the Mystery Reel Feature.

Motorhead Slots Wild symbols will substitute for all other symbols apart from the Scatter Symbols. When you land 3 Scatter symbols anywhere on reels 3, 4, and 5, in the main game it’ll activate 10 Free Spins.

When you land 3 Scatter symbols anywhere on reels 3, 4, and 5 in the main game you’ll bag yourself 10 Free Spins, and during the Free Spins feature, the Mystery Reels consist of both Mystery symbols and Wild symbols for extra winning opportunities.

Get the tunes cranked up by hitting the ‘Rock Mode’ to blast out four legendary hits from Motörhead’s music catalogue! Songs include Ace of Spades, Iron Fist, Killed by Death, and Overkill which are some of the bands most iconic songs!

Motorhead Slot Rtp % is at a solid 96.98% and is considered a mid variable slot machine. 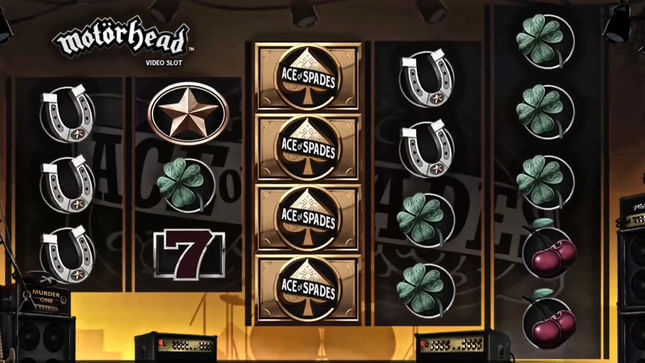 For those who like to play online slots and casino games on their mobile phones and tablets, giving you the freedom of being able to play anytime and anywhere, then there’s great news as the Motorhead Mobile Slot is a fantastic looking mobile slot which is formatted perfectly and fits all mobile devices and platforms!

There’s absolutely nothing is missing from the desktop version of the game, only you might want to pop in your earphones and listen to the soundtrack put on full volume!

Netent’s Motorhead Slot is one of the best slots online. We are Motorhead fans so we really appreciate it, but even if you aren’t it’s a fun and thrilling slot packed full of features, great music that will give you a totally different online casino experience. Netent have definitely excelled themselves with this game and it therefore comes highly recommended!

Have a look below and choose a recommended Netent Casino to play it at, each offering the best casino bonuses and free spins you'll find online!

Where You Can Play Motorhead Slot