Secrets of Atlantis Slot is a mythical greek themed online slot game which offers some really interesting in game features including colossal wilds and a nudge feature!

How to Play Secrets of Atlantis Slot

Design wise, since the City of Atlantis is a mythical city said to be immersed, sunken/ disappeared at the bottom of the sea, it also features in Plato’s work and is well known in Greek Mythology. So when you take this into account, you can expect the design of the slot have an underwater theme, featuring interesting mermaid characters which are there to help you on the journey of uncovering your own riches and treasures whilst playing the slot. On the reels there are icons including pearls, crabs and jewels and other treasures and artefacts.

Secrets of Atlantis Slot has many fun and interesting in game features which are sure to keep you entertained. These include Wilds (Mermaid Icon), a Nudge Feature, a Highlight feature and a feature which we really love: Colossal symbols which you might remember from Netent’s crazy Spinta Grande Slot!

This includes the wilds of the game and is where the mermaid can appear fully or partially on the reels. If part of the Nudge Wild appears only, it will be either be ‘nudged up’ or ‘nudged down’ to take over the whole reel, which could give you a fully wild reel for bigger win opportunities. What’s more, if you land a Colossal Stacked Wild on the reels during a Colossal symbols Re-spin, then the Colossal Stacked Wild will be again, nudged up or down to cover the 3 middle reels for massive wins! 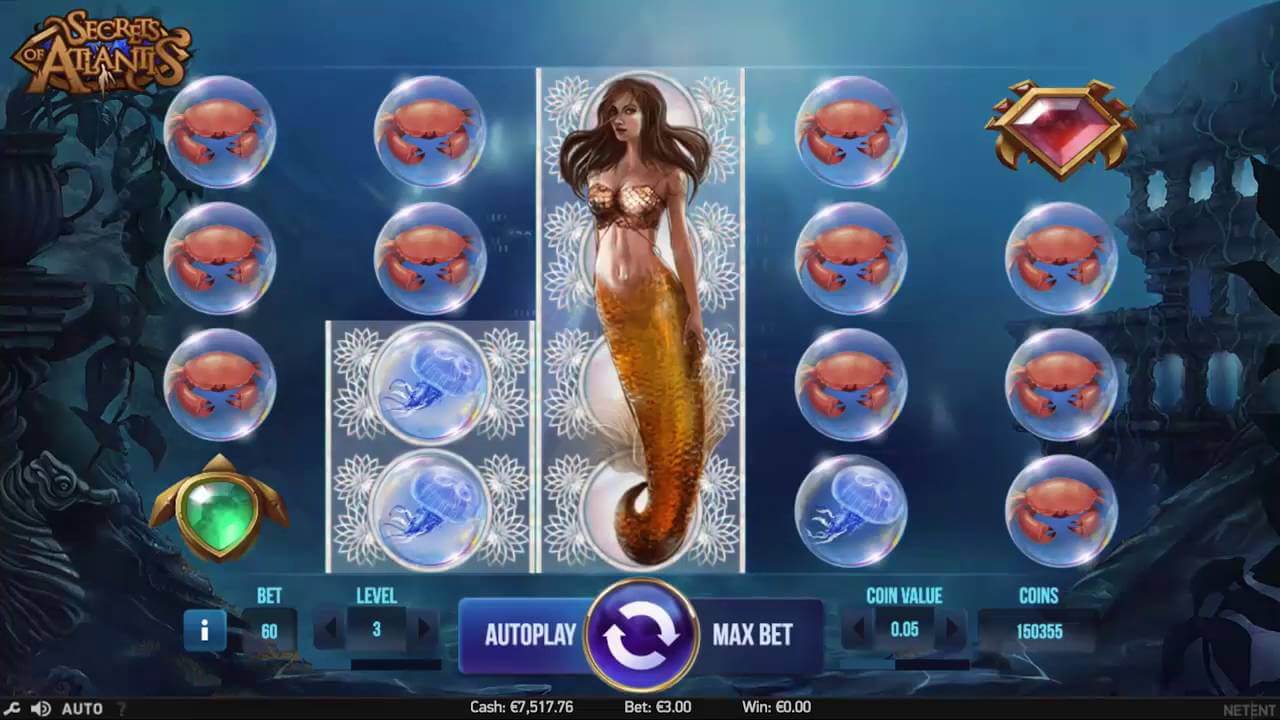 Secrets of Atlantis Mobile Slot looks fantastic and features the exact same in game features as you’d expect to see on the main desktop version.

If you’re looking for a fun yet mythical slot to play on mobile, once which offers some interesting and new features, then we recommend you to try Secrets of Atlantis Mobile Slot.

Secrets of Atlantis Slot is a top quality Netent Slot and perfect for those who love mythical and historical themes. Secrets of Atlantis Slot may at first glance look simple, but once you get playing there’s some fun surprised and entertaining features which we explained above, that keep things fun and thrilling especially if you land some of the colossal wild symbols!

Secrets of Atlantis Slot is a recommended game to play, so give it a try at one of our recommended Netent Casino below, each of which offer the best casino bonuses and Netent free spins offers online.

Where You Can Play Secrets of Atlantis Slot