We don’t mind adding that there are more graphically ‘creative’ cartoon slots out there from Netent, such as EggoMatic Slot and Space Wars Slot, but Netent have given Hooks Heroes a different look – its set in an old-style Theatrical stage setting!

It’s also not the first time Netent has produced a slot with a pirate theme, as Ghost Pirates Slot is readily available to play too, but Hooks Heroes is something else and this time, as NetEnt has given the story a twist to include fairies and mermaids too.

How to Play Hooks Heroes Slot

Netent’s Hooks Heroes Slot is designed with 5 reels, 3 rows and 20 play lines and a distinctive cartoon theme depicting swashbuckling pirates and Hook himself and some other, shall we say - odd looking creatures.

You could go as far as saying that they’re purposely designed as being rather ugly and we don’t mind being honest here; they’re totally creepy, bordering on sinister! And if you’re thinking cartoon and cute in the same sentence, well you’re in for a surprise as they haven’t been designed cute at all (apart from the fairies and mermaids of course) You’ll see what we mean when you load the slot.

To work out exactly how much you’re going to bet then it’s worth knowing the following; Bet Level: means the number of coins you bet with per spin and the coin value is the amount of money a single coin is worth. Essentially, the bet level will be multiplied by the coin value to determine the total amount of money you’ll wager per spin.

Hooks Heroes Slot can be played from as little as £0.20 or as much as £200 a spin which makes it perfect for all types of players and is considered a medium variance slot, which means that wins are often and verge towards the medium to smaller side. 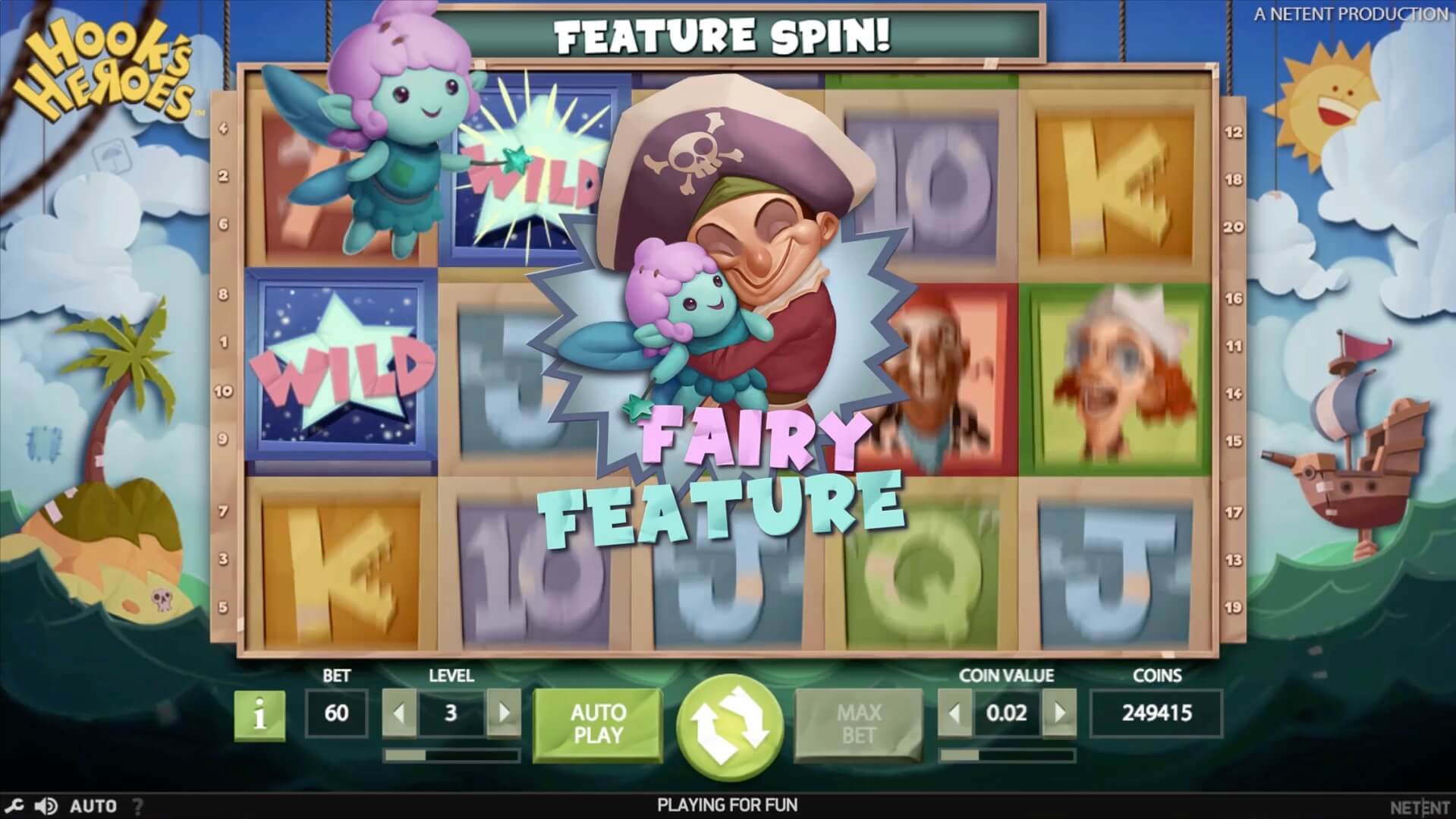 Bonus Rounds and In Game Features

The 3 different ‘features’ which can be activated also have their own functions. All of these features can be triggered by Scatter symbols and come as either a ‘Feature Spin’ or as the special game feature applied to a certain amount of Free Spins that are given. See below about what each feature does:

When you activate the Pirate Feature, then winning combinations are formed by 3 or more identical symbols anywhere on the reels, instead of only on the win lines of the slot and on adjacent reels. Do note however, that no Wild symbols will appear during this feature.

In this feature, 2 to 5 symbol substituting Wild symbols will be randomly placed as overlaying Wilds on any reel and on any position for some decent sized win opportunities.

Scatters and feature spins: When you get 2 Scatter symbols appearing anywhere on the reels randomly in the main game, then either the Pirate-, Fairy or Mermaid Feature described above is applied on the free ‘Feature Spins’ (or just think of a re-spin) which are as follows:

In this extra feature, when 3 or more Scatter symbols appear anywhere on the reels, the Free Spins mode is triggered. Here, you’ll need to choose which of the 3 features you want to play with during the free spins games. Each feature will give you a different amount of Free Spins:

If, however, during the main game you get 4 or 5 Scatter symbols appearing at the time you’ll then get to choose a free spins feature 2 or 3 times… It could be 2 or 3 times getting the same Feature or each time a different one.

Hook's Heroes slot has an Rtp of 96.9% and is considered to be a medium variance online slot machine.

Hook's Heroes Touch™ slot looks the same on mobile devices and offers the same in game features as the desktop slot does. And yes, the characters still look menacing to us in the mobile format! This slot doesn’t have as much win potential as some other great mobile slot out there, such as Piggy Riches, Dead or Alive Slot or Jack and the beanstalk, but it’s still worth trying out as it’s new, offers many in game features and aesthetically it’s very different.

Hook's Heroes is a great video slot in theory, but we’re not overly excited about the theme design. Don’t get us wrong, the graphics are definitely different and high quality, but we had a little hard time adjusting to them 'liking' the characters

which some may find, like us, a bit weird. But that’s just us.
The return to player (RTP) return to player rate is said to be as high as 96.82% which is very similar to NetEnt’s Starburst Slot, so think of that as a perk of playing, on top of the extra in game features which are there to aid you in winning more.

Will you fend off the pirates which are disguising themselves via a childlike theme and manage to get the treasure on board for yourself? We’ll leave that up to you. You can play Hooks Heroes Slot at any one of our recommended Netent casinos below, all of which offer the best casino bonuses and ongoing service and entertainment!

Where You Can Play Hooks Heroes Slot